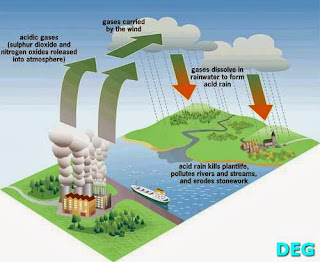 Acid rain is a rain or any other form of precipitation that is unusually acidic, meaning that it possesses elevated levels of  hydrogen ions (low pH).  It can have harmful effects on plants, aquatic animals, and infrastructure. Acid rain is caused by emissions of carbon dioxide, sulfur dioxide and nitrogen oxides which react with the water molecules in the atmosphere to produce acids. Governments have made efforts since the 1970s to reduce the release of sulfur dioxide into the atmosphere with positive results. Nitrogen oxides can also be produced naturally by lightning strikes and sulfur dioxide is produced by volcanic eruptions. The chemicals in acid rain can cause paint to peel, corrosion of steel structures such as bridges, and erosion of stone statues.