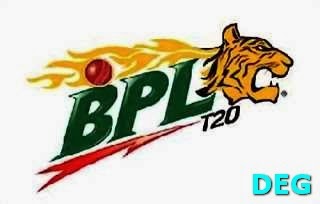 Bangladesh Premier League (BPL) is a professional Twenty 20 cricket league in Bangladesh, based on the format of the other international Premier League such as EPL, Pro20, Big Bash & IPL. The first edition of the tournament started on 10 February 2012 with six franchises consisting of players from around the world.
Like other successful premier leagues Bangladesh Cricket Board (BCB) decided to organize its own professional T20 league with a similar concept.
The BCB selected Game On from three Indians firms who had submitted a financial offer to manage the tournament. BCB spokesman Jalal Yunus said: “Initially Game On will deposit the proportionate amount of guaranteed money for two seasons to our account,” he said after an emergency BCB meeting. Twenty20 cricket is becoming increasingly popular in Bangladesh since neighboring India launched the IPL four years ago.
The winner of this tournament will qualify for the Champions League Twenty20[citation needed]. Dhaka Gladiators were the inaugural champions of the BPL
The inaugural season of the tournament will start on 9 February on 2012 with an opening ceremony with the first match to start on 10 February 2012 and will finish with the final on 29 February 2012. A total of 33 matches are scheduled, all of which will be played at two stadiums, Sher-e-Bangla Cricket Stadium and Zohur Ahmed Chowdhury Stadium. Each team will play each team twice, both at home and away in a round robin system. The top four teams at the end of the round robin stage will progress to the knockout stage. Sylhet and Chittagong failed to progress to the semi finals. Dhaka and Barisal reached semi finals. Afterwards, Dhaka took the champions trophy beating Barisal at final
There are five ways that a franchise can acquire a player. In the annual auction, buying domestic players, signing uncapped players, through trading and buying replacements. In the trading window players can only be traded with his consent. The franchise will have to pay the difference between the old contract price and the new contract price. If the new contract is worth more than the older one then the difference will be shared between the player and the franchise selling the player.
Each team will consist of 18 players with a maximum of 8 international players, up to 5 of which will be allowed to play in a match.
Each team must contain at least one Associate player, reflecting on Bangladesh’s own history as an Associate. A total of six Associate players have been signed, one each by the six franchises.

How to Keep a Diary

Disclaimer
https://itenglishit.com is a participant in the Amazon Services LLC Associates Program, an affiliate advertising program designed to provide a means for sites to earn advertising fees by advertising and linking to amazon.com. The Amazon logo and the AmazonSupply logo are trademarks of Amazon.com.