In this article we have published paragraph on traffic jam and also composition. There are a number of reasons of traffic jam 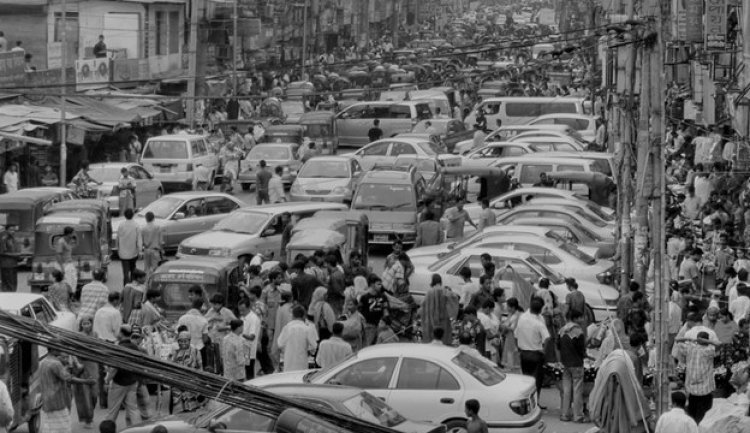 Traffic jam is a very important paragraph for board examinations like JSC, SSC, HSC in Bangladesh. We have published these following paragraph on  Traffic Jam to help the students so that they can easily find and learn as they need.

· What is traffic jam?

· What are the causes of traffic jam?

· What is the effect of traffic jam?

· When does generally a traffic jam occur?

· How can traffic jam be removed?/ What are the remedial measures of u?

· What is your opinion about the problem?

Traffic jam means blockade of vehicles on roads and streets. It is an unmoving state of vehicles on road. It mainly occurs at the crossing point of the road. It is a great problem in urban areas. There are a number of reasons of traffic jam. What contributes a lot to the traffic jam is over-population. Unlicensed and unauthorised rickshaws are the main causes of traffic jam. Violating traffic rules and regulations, illegal parking of vehicles on roads also cause traffic jam. Again, narrow roads and frequent digging  for development work cause traffic jam. Building materials piled up on roads cause traffic jam too. Whatever the causes of traffic jam may be, I think it is an unbearable problem for the urban people. In our daily activities. We cannot become fast and punctual because traffic jam kills our valuable time. Office going people. school going children and dying patients fall victim to traffic jam. As people cannot attend their work timely, it leaves a negative impact on our economy. So, it is the bounden responsibility of the authority concerned solve this problem. But it is very difficult to solve this problem. It requires united effort to solve this problem. In some places, government should build fly-over. Drivers should be trained and made aware of the traffic rules and regulations. Illegal parking on reads should be banned. Narrow roads should be made spacious. Rickshaws should be removed from main roads. Finally, traffic rules should be implemented strictly. Besides, we should not cross the roads in an indisciplined way . All these measures may be a solution to the traffic jam.

Traffic jam is a long line of a large number of vehicles on the street. It is very common in our country. It usually occurs near the bus station or the railway crossing or a big market. It is seen most often at the office time. Over population is the main cause of traffic jam. The number of vehicles is also increasing Again the traffic rules are not followed strictly. Traffic jam causes great sufferings to the passengers. The people lose their valuable time. The patients suffer most. Proper steps should be taken to solve this problem. The traffic rules should followed strictly. Overtaking tendency and illegal parking should be stopped. Above all, public awareness should raised to get rid of traffic jam.

A Traffic Jam I Experienced

Last week 1 experienced a heavy traffic jam on my way to school. My school is located only half a kilometer away from our house. I usually walk to my school. It was raining incessantly in the morning and there was water on the main road. So, I could not walk to school. At first, I searched for a rickshaw, but could not find any, Then, I got into a bus which was stuck up in traffic jam. Time was running on but there was no sign of movement of the bus. The rain increased its tempo. The bus began to roll on quite slowly. I saw a glimpse of hope of reaching school in time. But it got stopped again after hundred meter or so. Another four hundred meters. I started praying as I did not want to miss the class test scheduled for the day. Other passengers were talking impatiently about traffic jam, management of drainage system, role of authority and so on. The door and the windows of the bus were closed. The hot and humid condition inside the bus was intolerable. I was sweating. The bus started to roll on with stops and starts following the rain. When I heard the helper of the bus uttering the name of my stoppage, I jumped out of the bus. I walked to school located near the stoppage with my dress and shoes soaked in rain water. When I entered into class, I heard that the test was postponed due to inclement weather. The news added to my pains experienced during the traffic jam. The incident will be in my mind for a long time.

Traffic jam is the situation when vehicles are stopped completely for some time period on the roads. Also, vehicles have to wait for a long time to move out of the jam. Sometimes it becomes like congestion in traffic. This happens in transport network due to the increasing vehicles and overuse of roads. Often it is due to slow speed, longer trip time and increased queues of vehicles. Therefore, traffic jam is becoming a major issue mostly in all cities.

Let us discuss some major problems that arise due to high traffic:

Let us have a look at some chief disadvantages of traffic jams in detail below:

Some suggestions to solve the traffic jam problem are as follows:

Thus, traffic jam is a serious issue in every big city that causes several problems for common people. It consumes so much of time and energy unnecessarily and hence the loss of the nation. Therefore, serious measures have to be taken by the authorities to control traffic and promote the use of public transport. Development of public transport network at economical rates is essential. Implementation of traffic safety rules by traffic police is a must. People should drive more sensibly and responsibly. Hence we all can work in this way to solve the big threat of the current time.

Hence, due to their inefficiency, vehicles plying on the road cannot move freely, causing traffic jams. An accident on the road can also cause traffics jam. For instance, when a considerably big truck strikes something and trips over, it blocks the road and restricts other vehicles’ movements.

Traffic jams are also caused because of irresponsible and careless drivers driving their respective vehicles on the road. The irresponsibility of the Government officials can also result in causing of traffics jams. When the government department, assigned to maintain a lane, fails to perform their job, causes the streets to crack, creating significant depressions that further delay traffic movement on that particular road.

Often, heavy thunderstorms accompanied by heavy showers, giant trees, or branches fall on the road, blocking traffic movements. It even happens because of the heavy spells of rain that causes water to accumulate on the road and, this further hinders and slows down traffic movement on the road till the time the water is not pumped out of the road by the government departments.

Traffic jams can be stressful and frustrating when on the road. It delays all work processes. For instance, when we have essential work at the office or an exam to give at school or university, a traffic jam can cause real harm. It disrupts the working process’s normal flow, delays everything and shakes our concentration resulting in a decrease in work efficiency and hence, not achieving the desired or the deserved result of any work.

When an individual gets injured or falls ill and needs to be taken to the hospital immediately, a traffic jam can be deadly. It can cause irreparable loss to the patient as well as to the family of the patient. Hence, it is the duty of both the government and the citizens of the nation to reduce the number of traffic jams occurring in the country.

Traffic jams mostly occur in cities, to be more precise, in the metropolitan and the cosmopolitan cities of the country and the entire globe. Steps to curb traffic jams all over the country should be undertaken at the earliest.

10 Lines On Traffic Jam In English

Question: Write a short composition that expresses your opinion about “Traffic Jam“.

Answer: Traffic jam is a common feature in big cities of Bangladesh. Traffic jam is caused during office hour and at the time of going to schools, colleges, and universities. The congestion of various vehicles causes the traffic jam.

The cities in our country are overcrowded. People at a certain period, rush towards their respective destinations by buses, taxis, cars, and rickshaws. Everybody starts the competition to reach their own destination in due time. Thus it causes a traffic jam.

The number of roads is not enough. They are narrow as well. So the pressure of all transports at a time on these limited and narrow roads creates the traffic jam. On the other hand, our traffic system is not modern and scientific. Most of the traffic signals are defective. Moreover, our traffic police are not well-trained, careful and dutiful. Their negligence sometimes causes the traffic jam. Traffic jam sometimes kills a lot of time of the people. It puts pressure on nerves and creates tension to some extent.

So traffic system should be modernized. Roads should be made wider, traffic police should be trained up and above all, people should be more conscious. Government and the concerned authority should take steps to solve the problem.

Completing Sentence Not only -but also ─Either -or ─ Neither...